When I went thru basic training way back in 1958, I was a green, barefoot Florida Cracker kid from central Florida, fresh out of high school. I was barely out of high school and couldn't dream of going to college because my folks just didn't have the money. The Air Force was my only way for upward mobility. During basic after the first round of language aptitude tests I was one of a small group that was pulled for continuing language aptitude tests until finally we were included in a larger group that was taught a week of intensive Chinese. After each two hour session we were tested to see what we'd retained. At the end of each day a good number were told not to return the following day. Those who were still there on Friday had been selected for a 9 month of intensive course in Mandarin Chinese at the Yale University Institute of Far Eastern Languages. I was selected and was ecstatic!

The course was indeed intensive! We were taught how to monitor Chinese at increasingly rapid spoken rates of speeds and under increasingly less than optimum hearability conditions. There were good reasons for this but we didn't figure that out until much later.

Next our class went to NSA for a 3 month technical course where we learned to apply the skills we'd learned at Yale (and we'd picked up nearly 30 semester hours while there, by the way). The NSA training was classified Secret Code Word at that time. That was over 50 years ago and I've seen it described in open source in numerous places in recent years but I won't go into it here.

In January 1960 I was assigned to the 6987th Radio Squadron Mobile, Shu Linkou Air Station, Taiwan, Republic of China. We were one of a number of such units that ringed Communist China from Northern Japan, Korea, Southern Japan, Okinawa, Taiwan, The Philippines, Northern Vietnam, and later, Pakistan on the Indian sub-continent that were tasked with supplying the Pacific Command with real time intelligence on the activities of the Chinese Communist Air Force. We also did 'term reporting' on certain activities of 'special' interest.

We also had airborne intercept units that pretty much covered anything the ground based units couldn't 'hear'. We were pretty much on top of anything the flew from crop dusting to special training activities!

After my first tour in Taiwan, during which I was pretty much totally seduced. I'd made many friends, both mainland and native Taiwan Chinese. My spoken Chinese was getting pretty fluent and I really wanted to get back yo Yale for a higher level course. I applied and was accepted. With a tour in Taiwan under my belt, the course the courses were hard but I aced them all while both partying my ass off and falling in love with a New Haven maiden (with whom I'll be wed 54 years next anniversary). I learned to translate various handwriting styles of Chinese, which I thought was curious, but which served me well later. Such a time. Our favorite bar was Eddie Malone's Three Steins Irish Pub on Church Street. Long gone but never forgotten.

We left New Haven and spent 3 months in tech training at Goodfellow Air Force Base, San Angelo, TX. I learned to apply my new found skills and acquired a great love for Tex-Mex foods. Then, a stroke of good fortune, back to Taiwan. There I really got good at using my new skills and in local society, met wonderful people and my spoken skills got much better. And I've continued to polish them to this day. Toward the last few months of this tour, thanks to my speaking abilities, I was assigned to the R.O.C. National Air Defense Center working in liaison with our host nation!

After this tour and a tour as an instructor at Goodfellow , I left the AF and applied for employment with NSA. I was accepted and in May, 1967 began as a Translator/Analyst, GS-9 at $7696 per annum. Not much, but it was a start. During my first tear I learned that the Agency had 4 slots a year in the State Department's Foreign Service Institute School of Chinese and Area Studies in Taichung, Taiwan. Well, I had to go. I had a high school diploma and 50 semester hours in Chinese from Yale, and high hopes! I of course applied. Long story short, I was accepted! The course was a full year of intensive immersion Chinese (there were few English speakers in Taichung, students were basically forced to actively use Chinese in class and in society). I loved it! One of the courses was interpreting and I somehow managed to finagle maintaining it for a full six months with my favorite instructress, YY Chang (niece of 'the Young Marshal', you'll have to Google that one, it's worth doing!). It served me very well as you will see.

Over the course of my 32 year career I was a translator  analyst, a voice translator  analyst,  Section Chief, Branch Chief, Division Chief and Language Advisor to a major office within the Agency -- the one responsible for all SIGINT against Asia). I also was the interpreter for the chief of that office and the various chief under him and for some senior people around the intelligence community, my language skills took me to places that  I'd only dreamt of and finally got to see. A barefoot Florida cracker kid found it hard to believe but, by hook and by crook, it turned out to be possible!

And, here I am, interpreting for DIRNSA, Admiral McConnell and his guests at his home on Ft. Meade, Maryland. 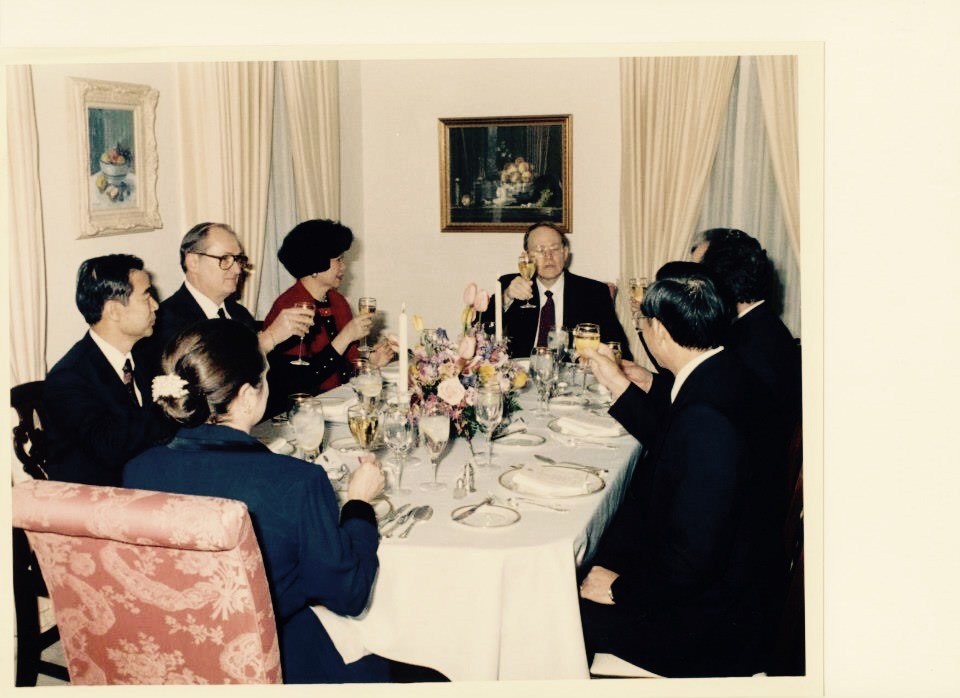